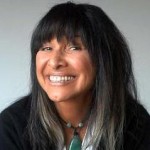 Buffy Sainte Marie was born in the Qu'Appelle Valley, Saskatchewan, Canada. She is a Canadian singer-songwriter, musician, composer, visual artist, educator, and social activist. Her singing and writing repertoire also includes subjects of love, war, religion, and mysticism. She founded the Cradleboard Teaching Project, an educational curriculum devoted to better understanding Native Americans. She has won recognition and many awards and honours for both her music and her work in education and social activism. She attended the University of Massachusetts Amherst, earning degrees BA- 1963 and PhD- 1983 in teaching and Oriental philosophy. Sainte-Marie played piano and guitar, self-taught, in her childhood and teen years. In 1997, Sainte-Marie won a Gemini Award for her 1996 variety special, Up Where We Belong. In 1983–4, the song "Up Where We Belong"from An Officer and a Gentleman won an Academy Award, a Golden Globe Award, and a BAFTA Film Award for Best Original Song. In 2010, she received the Governor General's Performing Arts Award.