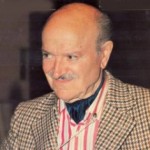 Bud Freeman was an American jazz musician, bandleader, and composer, known mainly for playing the tenor saxophone, but also able at the clarinet. He had a smooth and full tenor sax style with a heavy robust swing. He was one of the most influential and important jazz tenor saxophonists of the big band era. His major recordings were "The Eel", "Tillie's Downtown Now", "Crazeology", "The Buzzard", and "After Awhile", composed with Benny Goodman. In 1927, he moved to New York, where he worked as a session musician and band member with Red Nichols, Roger Wolfe Kahn, Ben Pollack, Joe Venuti, among others. He also released two memoirs You Don't Look Like a Musician and If You Know of a Better Life, Please Tell Me, and wrote an autobiography with Robert Wolf, Crazeology. In 1992, he was inducted into the Big Band and Jazz Hall of Fame.