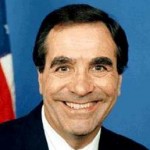 Bruce Vento was born in Saint Paul, Minnesota. He was an American politician, a Democratic-Farmer-Labor member of the United States House of Representatives from 1977 until his death in 2000. He served in the 95th, 96th, 97th, 98th, 99th, 100th, 101st, 102nd, 103rd, 104th, 105th, and 106th congresses, representing Minnesota's 4th congressional district. He received his BA in 1961. He later, in 1965, received a B.S with honors, from the University of Wisconsin. He was a public school teacher in Minneapolis, Minnesota prior to entering politics.