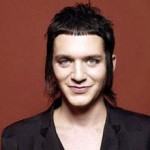 Brian Molko was born in Brussels, Belgium. He is a british musician, singer and songwriter of the band Placebo. He is known in particular for his nasal, high-pitched vocals, androgynous appearance, and unique, Sonic Youth-influenced guitar style and tuning. Along with Hewitt and Olsdal, he had a role in the 1998 film Velvet Goldmine, for which Placebo performed the T. Rex song "20th Century Boy". He played Malcolms, a singer of the fictional glam rock band, The Flaming Creatures, who resembled the early Alice Cooper band. During Placebo's live performances, Brian has played a number of instruments: guitar, bass guitar, keyboards, harmonica and saxophone. In December 2012, Molko received an Honorary Fellowship from Goldsmiths College, University of London. His parents attended the ceremony.