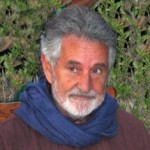 Breyten Breytenbach was born in Bonnievale, Western Cape, South Africa. He is a South African poet and painter. He also holds French citizenship. He studied fine arts at the Michaelis School of Fine Art at the University of Cape Town and became a committed opponent of the policy of apartheid. He became a visiting professor at the University of Cape Town in the Graduate School of Humanities in January 2000. Breytenbach's work includes numerous volumes of novels, poetry and essays, many of which are in Afrikaans. He is also known for his works of pictorial arts. Exhibitions of his paintings and prints were shown in numerous cities around the world including Johannesburg, Cape Town, Hong Kong, Amsterdam, Stockholm, Paris, Brussels, Edinburgh and New York City. Breytenbach worked as political activist from the 1960s onwards, drawing international attention to the human rights violations and injustices of the Apartheid government, and collaborating closely with UNESCO and the ANC. In 1975, on an “illegal” visit to South Africa to make contacts with activists and trade unionists, he was arrested, charged under the Terrorism Act and jailed for seven years. Released from prison in 1982, due to massive international pressure, he left for Paris where he obtained French citizenship.