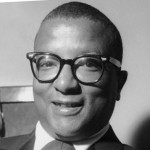 Billy Strayhorn was born in Dayton, Ohio. He was an American jazz composer, pianist, lyricist, and arranger, best known for his successful collaboration with bandleader and composer Duke Ellington, lasting nearly three decades. His compositions include "Take the 'A' Train", "Chelsea Bridge", and "Lush Life". He first became interested in music while living with her, playing hymns on her piano, and playing records on her Victrola record player. While still in grade school, he worked odd jobs to earn enough money to buy his first piano. While in high school, he played in the school band, and studied under the same teacher, Carl McVicker, who had also instructed jazz pianists Erroll Garner and Mary Lou Williams. By age 19, he was writing for a professional musical, Fantastic Rhythm.