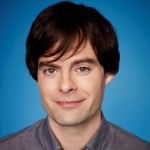 Bill Hader was born and raised in Tulsa, Oklahoma. He is an American actor, voice actor, comedian, producer and writer. He is known for his work as a cast member on Saturday Night Live, his lead role in The Skeleton Twins, his lead voice role in Cloudy with a Chance of Meatballs, and his supporting roles in comedy films such as Superbad, Pineapple Express, Tropic Thunder, Adventureland, Men in Black 3, Paul, Forgetting Sarah Marshall, Doogal, and Night at the Museum: Battle of the Smithsonian. Hader's aspirations of becoming a filmmaker eventually led him to drop out of college and move to Los Angeles in 1999. He worked as a production assistant on the DVD Empire of Dreams: The Story of the Star Wars Trilogy; the feature films James Dean, Spider-Man, The Scorpion King, and Collateral Damage; as well as a post-production assistant on VH1 television's The Surreal Life. Hader briefly worked as a PA and stage manager on Playboy TV's Night Calls.