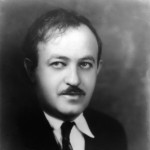 Ben Hecht was an American screenwriter, director, producer, playwright, and novelist. Called the Shakespeare of Hollywood, he received screen credits, alone or in collaboration, for the stories or screenplays of some seventy films and as a prolific storyteller, authored thirty-five books and created some of the most entertaining screenplays and plays in America. He was the first screenwriter to receive an Academy Award for Original Screenplay, for the movie Underworld 1927. The number of screenplays he wrote or worked on that are now considered classics is, according to Chicago's Newberry Library, astounding, and included films such as, Scarface 1932, Spellbound 1945, Notorious 1946, Monkey Business, A Farewell to Arms 1957, Mutiny on the Bounty 1962, and Casino Royale. He also provided story ideas for such films as Stagecoach 1939. In 1940 total, six of his movie screenplays were nominated for Academy Awards, with two winning. He married Rose Caylor that same year, and they remained married until Hecht's death in 1964.