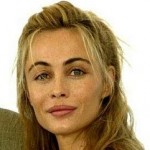 Beatrice Dalle is a French actress. Dalle was born in Brest, Finistère, France, as Béatrice Cabarrou. In 1985 she married the painter Jean François Dalle but they divorced in 1988. She is seen in a feature role in the 1991 music video Move To Memphis by Norwegian band a-ha. She made her debut to American audiences in Jim Jarmusch's Night on Earth in 1991. In 1997, she was cast in The Blackout, her first film made in the United States. In 2001, Dalle appeared in the controversial film, Trouble Every Day, in which she played a cannibal. In January, 2005, while making a film about prison life in Brest, Dalle met Guenaël Meziani, who was serving a 12-year prison sentence for assaulting and raping his ex-girlfriend. She married him after 24 one-hour visits with him, and spoke on his behalf at hearings for his early release. According to the newspaper Le Parisien, in May, 2009 just weeks after he was given a conditional release for good behavior, police were called to her flat in the Marais district of Paris because of a violent dispute in which Meziani allegedly threatened to kill her.