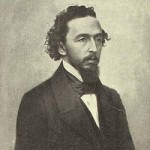 Bayard Taylor was an American poet, literary critic, translator, and travel author. In 1846, he published Views Afoot, or Europe seen with Knapsack and Staff. This book's success brought Taylor recognition as an author. He was asked to serve as an editorial assistant for Graham's Magazine for a few months in 1848. His next journey, made when the gold-fever was at its height, was to California as correspondent for the Tribune. From this expedition he returned by way of Mexico, and, seeing his opportunity, published a highly successful book of travels, entitled El Dorado or, Adventures in the Path of Empire. Within two weeks of release, the book sold 10,000 copies in the US and 30,000 in Great Britain. A few months after arriving in Berlin, Taylor died on December 19, 1878 his body was returned to the US and buried in Kennett Square, Pennsylvania.