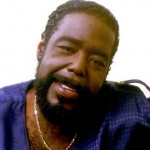 Barry White was born Barry Eugene Carter in Galveston, Texas, and grew up in the high-crime areas of South Central Los Angeles. He grew up listening to his mother's classical music collection, and first took to the piano emulating what he heard on the records. His introduction to music later led to him playing piano on Jesse Belvin's hit single, "Goodnight My Love."
During his teenage years, White and his brother got involved with crime and gang activity. At age 17, he was jailed for four months for stealing $30,000 worth of Cadillac tires. While in jail, White listened to Elvis Presley singing "It's Now or Never" on the radio, an experience he later credited with changing the course of his life. After his release from jail, he left gang life and began a musical career at the dawn of the 1960s in singing groups. He first released "Too Far to Turn Around" in 1960 as part of The Upfronts. Before going out on his own in the middle of the decade. The marginal success he had to that point was as a songwriter. His songs were recorded by rock singer Bobby Fuller and TV bubblegum act The Banana Splits. He was also responsible in 1963 for arranging "Harlem Shuffle" for Bob & Earl, which became a hit in the UK in 1969. He discovered disco/soul artists, Viola Wills and Felice Taylor in 1965 and signed them to Mustang/Bronco Records, for which he was working as A&R manager for Bob Keane.
In 1972, he got his big break producing a girl group he had discovered called Love Unlimited. White produced, wrote and arranged their classic soul ballad, "Walking In The Rain With The One I Love", which climbed to #14 in the Billboard Hot 100 Pop chart and #6 on the Billboard R&B chart in late 1972. In 1974 he released an album of their music titled Rhapsody in White, yielding the composition "Love's Theme", reaching #1 on the Billboard Pop charts. After six years White left 20th Century in 1979 to launch his own label, Unlimited Gold, with CBS/Columbia Records. Although White's success on the pop charts slowed down as the disco era came to an end, he maintained a loyal following throughout his career. On July 4, 2003, he died at Cedars-Sinai Medical Center in Los Angeles after suffering from total renal failure.