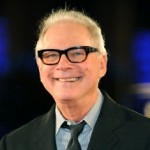 Barry Levinson is an American screenwriter, film director, actor, and producer of film and television. His most notable films include The Natural, Good Morning, Vietnam, Rain Man, Bugsy, and Bandits. Levinson was born in Baltimore, Maryland, the son of Violet Vi and Irvin Levinson, who worked in the furniture and appliance business. His family was of Russian Jewish descent. After growing up in Baltimore and graduating from Forest Park Senior High School, Levinson attended Baltimore City Community College, and American University in Washington, D.C. at the American University School of Communication, before moving to Los Angeles to work as an actor and writer. Levinson at one time shared an apartment with would-be drug smuggler George Jung. In 2004, Levinson was the recipient of the Austin Film Festival's Distinguished Screenwriter Award. Levinson directed a documentary PoliWood about the 2008 Democratic and Republican National Conventions. The documentary, produced by Tim Daly, Robin Bronk and Robert E. Baruc, had its premiere at the 2009 Tribeca Film Festival.