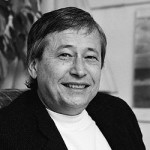 Howard Barry Hannah was an American novelist and short story writer from Mississippi. The author of eight novels and five short story collections, Hannah worked with notable American editors and publishers such as Gordon Lish, Seymour Lawrence, and Morgan Entrekin. His work was published in Esquire, The New Yorker, The Oxford American, Southern Review, and a host of American magazines and quarterlies. His first novel, Geronimo Rex 1972, won the William Faulkner Prize and was nominated for the National Book Award. Airships, his 1978 collection of short stories about the Vietnam War, the Civil War, and the modern South, won the Arnold Gingrich Short Fiction Award. Hannah won a Guggenheim, the Robert Penn Warren Lifetime Achievement Award, and the PEN/Malamud Award for excellence in the art of the short story. He was awarded the Fiction Prize of the Mississippi Institute of Arts and Letters twice and received Mississippi's prestigious Governor's Award in 1989 for distinguished representation of the state of Mississippi in artistic and cultural matters. He was director of the MFA program at the University of Mississippi, in Oxford, where he taught creative writing for 28 years. He died on March 1, 2010, of natural causes.