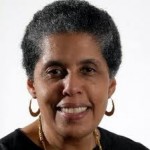 Barbara Smith in Cleveland is an American lesbian feminist who has played a significant role in building and sustaining Black Feminism in the United States. Since the early 1970s she has been active as a critic, teacher, lecturer, author, scholar, and publisher of Black feminist thought. She has also taught at numerous colleges and universities over the last twenty five years. Smith's essays, reviews, articles, short stories and literary criticism have appeared in a range of publications, including The New York Times Book Review, The Black Scholar, Ms., Gay Community News, The Guardian, The Village Voice, Conditions and The Nation. Barbara has a twin sister, Beverly Smith, who is also a lesbian feminist activist and writer. Smith was made a Bunting Institute at Radcliffe College Fellow in 1996, and received a 1994 Stonewall Award for her activism. She was awarded the Church Women United’s Human Rights Award in 2000 and was nominated for a Nobel Peace Prize in 2005.