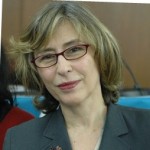 Azar Nafisi is the daughter of Ahmad Nafisi, a former mayor of Tehran (1961–1963) who was the youngest man ever appointed to the post up to that time. She was educated in Switzerland and received her Ph.D. from the University of Oklahoma.
Nafisi returned to Iran in 1979 where for a brief time she taught English literature at the University of Tehran. In the aftermath of the Iranian revolution of 1979 and the subsequent rise to power of the Ayatollah Khomeini, Nafisi soon became restless with the stringent rules imposed upon women by her country's new rulers. She spoke of the freedom that she believed women in some countries took for granted, which women in Iran had now lost as the Khomeini regime enacted laws curtailing women's rights. In 1995, she states that she was no longer able to teach English literature properly without attracting the scrutiny of the faculty authorities, so she quit teaching at the university, and instead invited seven of her female students to attend regular meetings at her house, every Thursday morning. They studied literary works including some considered controversial in postrevolutionary Iranian society such as Lolita alongside other works such as Madame Bovary. She also taught novels by F. Scott Fitzgerald, Henry James and Jane Austen, attempting to understand and interpret them from a modern Iranian perspective
Nafisi left Iran on June 24, 1997 and moved to the United States, where she wrote Reading Lolita in Tehran: A Memoir in Books, a book where she describes her experiences as a secular woman living and working in the Islamic Republic of Iran. In the book, she declares "I left Iran, but Iran did not leave me." Nafisi has held the post of a visiting fellow and lecturer at the Foreign Policy Institute of Johns Hopkins University’s School of Advanced International Studies (SAIS) in Washington, DC and has served on the Board of Trustees of Freedom House, a United States nongovernmental organization (NGO) which conducts research and advocacy on democracy.