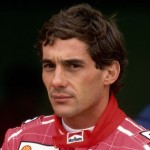 Senna was born in Santana, a neighbourhood of São Paulo city, the son of wealthy Brazilian landowner and factory owner Milton da Silva and his wife Neide Senna da Silva. He was highly athletic, excelling in gymnastics and other sports, and developed an interest in cars and motor racing at the age of four.
Senna's first kart was a small 1 HP go-kart, built by his father using a lawnmower engine. Senna entered karting competition at the age of 13 and, in 1977, won the South American Kart Championship. He contested the Karting World Championship each year from 1978 to 1982, finishing runner-up in 1979 and 1980.
In 1981, Senna moved to England to begin single-seater racing, winning the RAC and Townsend-Thoreson Formula Ford 1600 Championships that year with the Van Diemen team. Despite this, Senna initially did not believe he would continue in motorsport. At the end of the season, under pressure from his parents to take up a role in the family business, he returned to Brazil. Before leaving England, however, Senna was offered a drive with a Formula Ford 2000 team for £10,000. Back in Brazil, he decided to take up this offer and returned to live in England. As Silva is a very common Brazilian name, he adopted his mother's maiden name, Senna. Senna went on to win the 1982 British and European Formula Ford 2000 championships under that surname.
In 1983, Senna drove in the British Formula Three Championship with the West Surrey Racing team. He dominated the first half of the season until Martin Brundle, driving a similar car for Eddie Jordan Racing, closed the gap in the second part of the championship. Senna won the title at the final round after a closely fought and, at times, acrimonious battle. In November that year, he triumphed at the inaugural Macau Formula 3 Grand Prix with Teddy Yip's Toyota powered Theodore Racing Team.