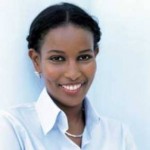 Ayaan Hirsi Ali was born into a Majerteen family in Mogadishu, Somalia. Her father, Hirsi Magan Isse, was a prominent member of the Somali Salvation Democratic Front and a leading figure in the Somalian Revolution. Shortly after she was born, her father was imprisoned due to his opposition to Somalia's Siad Barre government. Hirsi Ali attended the English-language Muslim Girls' Secondary School. By the time she reached her teens, Saudi-funded religious education was becoming more influential among Muslims in other countries, and a charismatic religious teacher who had been trained under this aegis joined Hirsi Ali's school. She inspired the teenaged Ayaan, as well as some fellow students, to adopt the more rigorous Saudi Arabian interpretations of Islam, as opposed to the more relaxed versions then current in Somalia and Kenya.
Hirsi Ali arrived in the Netherlands in 1992. There is some lack of clarity about the events leading up to her arrival, and she has admitted to making false statements in her application for asylum to enhance her chances of staying in the Netherlands. Hirsi Ali states that in 1992 her father arranged to marry her to a distant cousin. She says that she objected to this both on general grounds, and on specific objections to this particular cousin, saying that he was a "bigot" and an "idiot".
Between 1995 and 2001 she also worked as an independent Somali-Dutch interpreter and translator, frequently coming into contact with Somali women in asylum centres, hostels for battered women, and the Dutch immigration and naturalisation service. While working for the IND, she saw inside the workings of the Dutch immigration system and became critical of the way it handled asylum seekers. As a result of her education and experiences, Hirsi Ali speaks six languages: English, Somali, Arabic, Swahili, Amharic and Dutch.