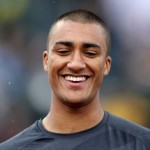 Ashton James Eaton was born in Portland, Oregon. He is an American decathlete and Olympic champion, who holds the world record in both the decathlon and heptathlon events, and is only the second decathlete  to break the 9,000-point barrier, with 9,039 points. He competes for the Oregon Track Club Elite team based in Eugene, Oregon. In college, Eaton competed for the University of Oregon, where he was a five-time NCAA champion, and won The Bowerman award in 2010. In 2011, Eaton won the first international medal of his career, a silver, in the decathlon at the 2011 World Championships. The following year, Eaton broke his own world record in the heptathlon at the 2012 World Indoor Championships, and then went on to break the world record in the decathlon at the Olympic Trials. After setting the world record, Eaton easily won the gold medal at the 2012 Summer Olympics in London.