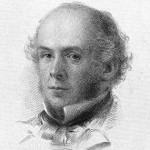 Arthur Clough was born in Liverpool to James Butler Clough, a cotton merchant of Welsh descent, and Anne Perfect, from Pontefract in Yorkshire. In 1828 Clough and his older brother Charles returned to England to attend school in Chester. In 1829 Clough began attending Rugby School, then under Thomas Arnold, whose strenuous views on life and education he accepted. Cut off to a large degree from his family, he passed a somewhat solitary boyhood, devoted to the school and to early literary efforts in the Rugby Magazine. In 1836 his parents returned to Liverpool, and in 1837 he went with a scholarship to Balliol College, Oxford.
Oxford, in 1837, was in the full swirl of the High Church movement led by John Henry Newman. Clough was for a time influenced by this movement, but eventually rejected it. He surprised everyone by graduating from Oxford with only Second Class Honours, but won a fellowship with a tutorship at Oriel College. He became unwilling to teach the doctrines of the Church of England, as his tutorship required of him, and in 1848 he resigned as tutor and traveled to Paris, where he witnessed the revolution of 1848. In 1849 he witnessed another revolution, the siege of the Roman Republic, which inspired another long poem, Amours de Voyage. Easter Day, written in Naples, was a passionate denial of the Resurrection and the fore-runner of the unfinished poem Dipsychus.
He traveled in 1852 to Cambridge, Massachusetts, encouraged by Ralph Waldo Emerson. There he remained several months, lecturing and editing an older edition of Plutarch for the booksellers, until in 1853 the offer of an examinership in the Education Office brought him to London once more. He married Miss Shore Smith and pursued a steady official career, diversified only by an appointment in 1856 as secretary to a commission sent to study foreign military education.
He died in Florence on 13 November.