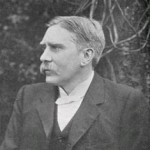 Arthur Christopher Benson was an English essayist, poet, and author and the 28th Master of Magdalene College, Cambridge. Despite his illness, Arthur was a distinguished academic and a most prolific author.  He was educated at Temple Grove School, Eton, and King's College, Cambridge. From 1885 to 1903 he taught at Eton, returning to Cambridge to lecture in English literature for Magdalene College. His poems and volumes of essays, such as From a College Window, and The Upton Letters were famous in his day; and he left one of the longest diaries ever written, some four million words. Today, he is best remembered as the author of the words of one of Britain's best-loved patriotic songs, Land of Hope and Glory. The bulk of his published ghost stories in the two volumes The Hill of Trouble and The Isles of Sunset  were written as moral allegories for his pupils. A Fellow of the Royal Society of Literature, he founded the Benson Medal in 1916, to be awarded 'in respect of meritorious works in poetry, fiction, history and belles lettres'.