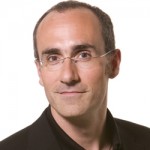 Arthur C. Brooks is an American social scientist and musician. He is the president of the American Enterprise Institute, a conservative think tank. Brooks is best known for his work on the junctions between culture, economics, and politics. Two of his popular volumes, Who Really Cares: The Surprising Truth about Compassionate Conservatism and Gross National Happiness: Why Happiness Matters for America—and How We Can Get More of It, explore these themes in greater depth. He is a self-described independent. After high school, Brooks pursued a career as a professional French hornist, serving from 1983 to 1989 with the Annapolis Brass Quintet in Baltimore, from 1989 to 1992 as the associate principal French hornist with the City Orchestra of Barcelona in Spain, and teaching from 1992 to 1995 at The Harid Conservatory, Music Division. Toward the end of his professional music career, Brooks began pursuing his higher education with a bachelor's degree in economics in 1994 from Thomas Edison State College in New Jersey.  He received a master's degree from Florida Atlantic University in 1995. After receiving his PhD in policy analysis in 1998, Brooks continued to be affiliated with RAND, for which he produced a number of studies, mostly on arts funding and orchestra operations. In 2005, he became a full professor, and held the Louis A. Bantle Chair in Business and Government Policy from 2007 to 2008.