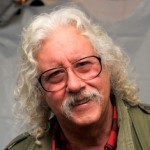 Arlo Guthrie was born in Brooklyn, New York, the son of folk singer and composer Woody Guthrie and his wife Marjorie Mazia Guthrie. Guthrie attended Woodward School in Clinton Hill Brooklyn 1st through 8th grades and later graduated from the Stockbridge School, in Stockbridge, Massachusetts, in 1965, and briefly attended Rocky Mountain College. He received an Honorary Doctorate from Westfield State College, in 2008. As a singer, songwriter and lifelong political activist, Guthrie carries on the legacy of his legendary father. He was awarded the Peace Abbey Courage of Conscience award on September 26, 1992.
The "Alice's Restaurant" song was one of a few very long songs to become popular just when albums began replacing hit singles as young people's main music listening. But in 1972 Guthrie had a highly successful single too, Steve Goodman's song "City of New Orleans", a wistful paean to long-distance passenger rail travel. Guthrie's first trip on that train was in December 2005. He also had a minor hit with his song "Coming into Los Angeles," which was played at the 1969 Woodstock Festival, and success with a live version of "The Motorcycle Song."
In the fall of 1975 during a benefit concert in Massachusetts, Arlo Guthrie performed with his band Shenandoah in public for the first time. They continued to tour and record throughout the 1970s until the early 1990s.Arlo Guthrie is mentioned in Tim Winton's novel The Riders – shortlisted for the Booker Prize in 1995. A character in the novel overhears locals in the small Irish town of Shinrone, recount the night Arlo Guthrie came to play. The actual event occurred in February 1988, when Arlo played the local gymnasium in Shinrone, County Offaly. The concert was organised by a local postman, Tom Stapleton.