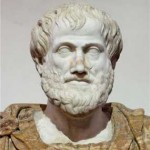 Aristotle was born in Stagira, Chalcidice. He was a Greek philosopher and scientist. At eighteen, he joined Plato's Academy in Athens and remained there until the age of thirty-seven. His writings cover many subjects – including physics, biology, zoology, metaphysics, logic, ethics, aesthetics, poetry, theater, music, rhetoric, linguistics, politics and government – and constitute the first comprehensive system of Western philosophy. Shortly after Plato died, Aristotle left Athens and, at the request of Philip of Macedon, tutored Alexander the Great between 356 and 323 BCE. According to the Encyclopædia Britannica, "Aristotle was the first genuine scientist in history ... every scientist is in his debt." He established a library in the Lyceum which aided in the production of many of his hundreds of books. The fact that Aristotle was a pupil of Plato contributed to his former views of Platonism, but, following Plato's death, Aristotle immersed himself in empirical studies and shifted from Platonism to empiricism. Aristotle's views on physical science profoundly shaped medieval scholarship.