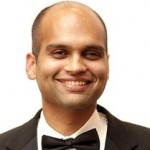 Aravind Adiga was is an Indian-Australian writer and journalist. His debut novel, The White Tiger, won the 2008 Man Booker Prize. Adiga grew up in Mangalore and studied at Canara High School, then at St. Aloysius High School, where he completed his SSLC in 1990. He secured first rank in the state in SSLC. After emigrating to Sydney, Australia, with his family, he studied at James Ruse Agricultural High School. He studied English literature at Columbia College, Columbia University, in New York, where he studied with Simon Schama and graduated as salutatorian in 1997. He also studied at Magdalen College, Oxford, where one of his tutors was Hermione Lee. Adiga began his journalistic career as a financial journalist, interning at the Financial Times. With pieces published in the Financial Times and Money, he covered the stock market and investment, interviewing, among others, Donald Trump. He currently lives in Mumbai, India.