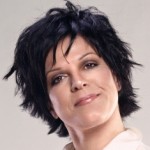 April Terri Winchell is an American actress, writer, voice actress, talk radio host, and commentator. She was born in New York City, the daughter of ventriloquist, voice actor and comedian Paul Winchell. Winchell's current projects include the role of Sylvia in Wander Over Yonder, a Disney animated series featuring Jack McBrayer in the title role. As a voice actress, she has been heard in hundreds of animated television programs, such as Goof Troop, Robot and Monster, Phineas & Ferb, Pucca, Kim Possible, Recess, Disney's House of Mouse and Mickey Mouse Clubhouse, Bonkers, Pepper Ann, The Legend of Tarzan and 101 Dalmatians: The Series, SWAT Kats: The Radical Squadron. Besides her many contributions to radio advertising as a performer, writer and director, Winchell also hosted a radio talk show program on KFI, a Los Angeles radio station.