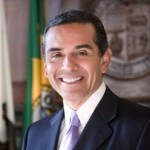 Born Antonio Villar in the City Terrace neighborhood of Los Angeles County's Eastside, Villaraigosa attended both Catholic and public schools. At the age of 16, a benign tumor in his spinal column briefly paralyzed him from the waist down, curtailing his ability to play sports. His grades plummeted at Cathedral High School. The next year, he was expelled from the Roman Catholic institution after getting into a fight after a football game. He graduated from Roosevelt High School after taking adult education classes there at night, and, with the help of his English teacher Herman Katz, went on to attend East Los Angeles College. Villaraigosa eventually transferred to University of California, Los Angeles (UCLA), graduating with a B.A. in History in 1977. At UCLA, he was a leader of MEChA. At this time, he went by the name "Tony Villar" but began using his birth name, Antonio, in the 1980s.
After UCLA, Villaraigosa attended the People's College of Law (PCL), an unaccredited law school that promotes labor union causes in Los Angeles. His desire to practice law has been prevented due to his repeated inability to pass the Bar Exam, which he has failed four times. After PCL, he became a field representative/organizer with the United Teachers Los Angeles (UTLA). He later served as president of the Los Angeles chapter of the American Civil Liberties Union and the American Federation of Government Employees.
He received an honorary Doctor of Humane Letters degree from University of Southern California in May 2006.