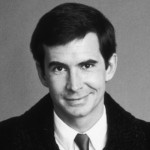 Anthony Perkins was an American actor. Perkins was nominated for a Best Supporting Actor Oscar for his second film, Friendly Persuasion. He is best known for playing Norman Bates in Psycho. His other films include The Trial, Fear Strikes Out, Tall Story, The Matchmaker, Pretty Poison, and The Black Hole. Perkins was born in New York City, son of stage and film actor Osgood Perkins and his wife Janet Rane. He was five when his father died. Perkins was a descendant of a Mayflower passenger, John Howland. He attended The Brooks School, The Browne & Nichols School, Columbia University and Rollins College, having moved to Boston in 1942. Perkins died on September 12, 1992, from complications of AIDS. He was cremated, and his ashes were given to his family. His widow, Berry Berenson, was killed on American Airlines Flight 11 during the September 11 terrorist attacks in 2001.