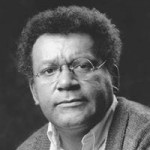 Anthony Braxton is an American composer, musician, and philosopher. Braxton has released well over 100 albums since the 1960s. Among the array of instruments he plays are the sopranino, soprano, C-melody, F mezzo-soprano, E-flat alto, baritone, bass, and contrabass saxophones; the E-flat, B-flat, and contrabass clarinets; and the piano. He used to play flute and alto flute as well, but has since discontinued his use of these instruments. Braxton studied philosophy at Roosevelt University. He taught at Mills College in the 1980s, and was Professor of Music at Wesleyan University in Middletown, Connecticut from the 1990s until his retirement at the end of 2013. He taught music composition and music history, offering his personal and academic perspectives on the great, often marginalized men and women who made vital contributions to the dynamics of creative music and the avant-garde. In 1994, he was granted a MacArthur Foundation "genius grant". In 2013, he was named a 2014 National Endowment for the Arts Jazz Master.