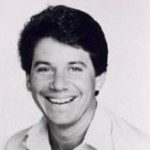 Anson Williams was born Anson William Heimlich in Los Angeles, California. He is an American actor and director, best known for his role as gullible but well-intentioned singer Warren "Potsie" Weber on the television series Happy Days. In 1972, Williams landed the role of "Potsie" in a segment of the comedy-anthology series Love, American Style titled "Love and the Happy Days", which also introduced Richie Cunningham, Richie's mother Marion, and other characters that would be spun off into the television series Happy Days. After Happy Days, Williams began a much more prolific career as a television director, starting with short programs for adolescent-age children, including afterschool specials "No Greater Gift" and "The Drug Knot", and TV-movie Lone Star Kid. He has gone on to direct many episodes for a variety of television series, including Beverly Hills, 90210, Melrose Place, seaQuest DSV, Star Trek: Deep Space Nine, Star Trek: Voyager, Xena: Warrior Princess, Hercules: The Legendary Journeys, The Secret Life of the American Teenager, Sabrina the Teenage Witch and Charmed. He also directed several episodes of the TV series 7th Heaven.