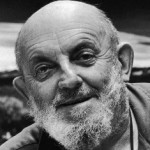 Ansel Adams was born in the Western Addition of San Francisco, California. He was an American photographer and environmentalist. His black-and-white landscape photographs of the American West, especially Yosemite National Park, have been widely reproduced on calendars, posters, and in books. With Fred Archer, Adams developed the Zone System as a way to determine proper exposure and adjust the contrast of the final print. The resulting clarity and depth characterized his photographs. Adams primarily used large-format cameras because their high resolution helped ensure sharpness in his images. Adams founded the photography Group f/64 along with fellow photographers Willard Van Dyke and Edward Weston. In 1921, Ansel Adams produced his first photograph. In 1927, Adams produced his first portfolio, Parmelian Prints of the High Sierras, in his new style, which included his famous image Monolith, the Face of Half Dome, taken with his Korona view camera using glass plates and a dark red filter. Adams received a Doctorate of Arts from both Harvard and Yale universities. He was elected a Fellow of the American Academy of Arts and Sciences in 1966. He was awarded the Conservation Service Award by the Department of the Interior in 1968, a Presidential Medal of Freedom in 1980, the Sierra Club John Muir Award in 1963, and was inducted into the California Hall of Fame by California Governor Arnold Schwarzenegger and First Lady Maria Shriver in 2007. Adams was presented with the Hasselblad Award in 1981.