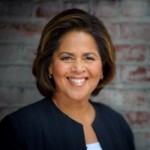 Anna Deavere Smith was born in Baltimore, Maryland. She is an American actress, playwright, and professor. She is currently the artist-in-residence at the Center for American Progress. Smith is widely known for her roles as National Security Advisor Dr. Nancy McNally in The West Wing, and as hospital administrator Gloria Akalitus in the Showtime series Nurse Jackie. She is a recipient of The Dorothy and Lillian Gish Prize, one of the richest prizes in the American arts, with a remuneration of $300,000. She received her M.F.A. in Acting from the American Conservatory Theater in San Francisco, California. Smith teaches in the Department of Performance Studies at the Tisch School of the Arts at New York University. From 1990 to 2000, she was a professor in the drama department at Stanford University and prior to that taught at Carnegie Mellon University. She also teaches at NYU School of Law. In 2009, Smith published her first book, Talk to Me: Travels in Media and Politics. In 2006, she released another, Letters to a Young Artist: Straight-up Advice on Making a Life in the Arts-For Actors, Performers, Writers, and Artists of Every Kind.