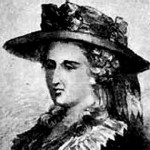 Radcliffe was born as Ann Ward in Holborn, London on 9 July 1764. Her father was William Ward, a haberdasher, her mother was Ann Oates. In 1787, she married Oxford graduate and journalist William Radcliffe, part-owner and editor of the English Chronicle. He often came home late, and to occupy her time she began to write and read her work to him when he returned home. Radcliffe published 6 novels in all. These ar The Castles of Athlin and Dunbayne, Gaston de Blondeville, The Italian, The Mysteries of Udolpho, The Romance of the Forest and A Sicilian Romance. She also published a book of poetry, but her talent for prose far exceeded her poetic ability. She also authored a work, based on her sole excursion to the Continent A Journey Made in the Summer of 1794, through Holland and the Western Frontier of Germany...To Which Are Added Observations of a Tour to the Lakes (1795).
Ann Radcliffe had a profound influence on many later authors, including the Marquis de Sade (1740–1814), Edgar Allan Poe (1809–1849) and Sir Walter Scott (1771–1832). Scott also interspersed his work with poems, as did Radcliffe. When Ann died on 7 February 1823, there were some reports that she was insane. However, her husband adamantly claimed that she had died of an asthma attack.