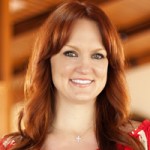 Ann Marie Drummond is an award-winning American blogger, No. 1 New York Times bestselling author, food writer, photographer and television personality who lives on a working ranch outside of Pawhuska, Oklahoma. In February 2010, she was listed as No. 22 on Forbes' Top 25 Web Celebrities—one of only four women. Her blog, The Pioneer Woman, which documents Drummond's daily life as a ranch wife and mother, was named Weblog of the Year 2009 and 2010 at the Annual Weblog Awards. Drummond has appeared on Good Morning America, the Today Show on NBC, The View, The Chew and The Bonnie Hunt Show. Her first cookbook, The Pioneer Woman Cooks: Recipes from an Accidental Country Girl, was published in October 2009. Her second cookbook, The Pioneer Woman Cooks: Food from My Frontier, was published in March 2012. She graduated from the University of Southern California in 1991, having first studied journalism before switching to gerontology.