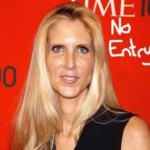 Ann Hart Coulter was born in New York City on December 8, 1961, to Nell Husbands and John Vincent Coulter. The family later moved to New Canaan, Connecticut, where Coulter and her two older brothers, James and John, were raised. She graduated from New Canaan High School in 1980. Coulter's age was disputed in 2002 while she was arguing that she was not yet 40, yet Washington Post columnist Lloyd Grove cited that she provided a birthdate of December 8, 1961, when registering to vote in New Canaan, Connecticut prior to the 1980 Presidential election. Meanwhile, a driver's license issued several years later allegedly listed her birthdate as December 8, 1963. Coulter will not confirm either date, citing privacy concerns.
While attending Cornell University, Coulter helped found The Cornell Review, and was a member of the Delta Gamma national women's fraternity. She graduated cum laude from Cornell in 1984 with a B.A. in history, and received her J.D. from the University of Michigan Law School in 1988, where she achieved membership in the Order of the Coif and was an editor of the Michigan Law Review. At Michigan, Coulter was president of the local chapter of the Federalist Society and was trained at the National Journalism Center.