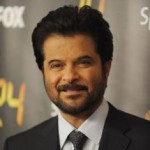 Anil Kapoor was born in Chembur, Mumbai, India. He  is an Indian actor and producer who has appeared in many Bollywood films and more recently international films. Kapoor's career has spanned almost 35 years as an actor, he turned into producer with his critically acclaimed movie namely Gandhi, My Father. Anil Kapoor made his Hindi film debut with Umesh Mehra's Hamare Tumhare in a small role. He was then starred as a lead actor in the 1980 Telugu film, Vamsa Vruksham directed by veteran Bapu. He then made his Kannada film, debut with Mani Ratnam's blockbuster Pallavi Anu Pallavi. He received his first Filmfare Award, in the Best Supporting Actor category, for his role in Yash Chopra's Mashaal . Kapoor earned his first Filmfare Best Actor Award for his performance in N. Chandra's Tezaab and later again for his performance in Indra Kumar's Beta. He also starred in many other critically and commercially successful films, including Woh Saat Din, Meri Jung, Janbaaz, Karma, Mr. India, Virasat for which he won the Filmfare Critics Award for Best Actor, Biwi No.1, Taal for which he won his second Filmfare Best Supporting Actor Award, Pukar for which he won a National Film Award for Best Actor as well as No Entry, Welcome, Race and Race 2.