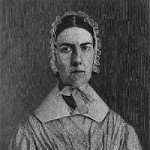 Angelina Emily Grimké Weld was an American political activist, abolitionist, women's rights advocate, and supporter of the women's suffrage movement. The time of her greatest fame was between 1836, when a letter she sent to William Lloyd Garrison was published in his anti-slavery newspaper, The Liberator, and May 1838, when she gave a courageous and brilliant speech to abolitionists gathered in Philadelphia, with a hostile crowd throwing stones and shouting outside the hall. The essays and speeches she produced in that two-year period were incisive arguments to end slavery and to advance women's rights. Grimké married Theodore Weld, a prominent abolitionist, in May 1838. They lived in New Jersey, with her sister Sarah Grimke, and raised three children, supporting themselves by running two schools, the later located in the Raritan Bay Union utopian community. After the Civil War ended, the Grimke-Weld household moved to Hyde Park, Massachusetts, where they spent their last years. Angelina and Sarah were active in the Massachusetts Woman Suffrage Association in the 1870s.