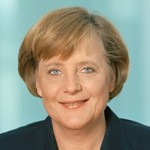 Angela Dorothea Merkel is a German politician and a former research scientist, who has been the Chancellor of Germany since 2005 and the leader of the Christian Democratic Union since 2000. She is the first woman to hold either office, the first German Chancellor to be born after World War II, and the first post-reunification Chancellor to hail from the former East Germany. Having earned a doctorate as a physical chemist, Merkel entered politics in the wake of the Revolutions of 1989, briefly serving as the deputy spokesperson for the first democratically elected East German Government in 1990.  After the CDU/CSU coalition was defeated in 1998, she was elected Secretary-General of the CDU, before being elected the party's first ever woman as leader in 2000. Following the 2005 federal election, she was appointed Germany's first female Chancellor at the head of a grand coalition consisting of her own CDU party, its Bavarian sister party, the Christian Social Union, and the Social Democratic Party of Germany.  In 2007, Merkel was President of the European Council and chaired the G8, the second woman to do so.  Angela Merkel has been described as the de facto leader of the European Union, and was ranked as the world's second most powerful person by Forbes magazine in 2013, the highest ranking ever achieved by a woman, and is now ranked fifth.