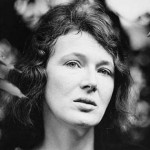 Born Angela Olive Stalker in Eastbourne, in 1940, Carter was evacuated as a child to live in Yorkshire with her maternal grandmother. As a teenager she battled anorexia. After attending Streatham & Clapham High School, in south London, she began work as a journalist on the Croydon Advertiser, following in the footsteps of her father. Carter attended the University of Bristol where she studied English literature.
She wrote about her experiences there in articles for New Society and a collection of short stories, Fireworks: Nine Profane Pieces (1974), and evidence of her experiences in Japan can also be seen in The Infernal Desire Machines of Doctor Hoffman (1972). She then explored the United States, Asia and Europe, helped by her fluency in French and German. She spent much of the late 1970s and 1980s as a writer in residence at universities, including the University of Sheffield, Brown University, the University of Adelaide, and the University of East Anglia.
Two of her fictions have been adapted for the silver screen: The Company of Wolves (1984) and The Magic Toyshop (1987). She was actively involved in both film adaptations, her screenplays are published in the collected dramatic writings, The Curious Room, together with her radio scripts, a libretto for an opera of Virginia Woolf's Orlando, an unproduced screenplay entitled The Christchurch Murders and other works
Angela Carter died aged 51 in 1992 at her home in London after developing lung cancer.