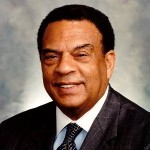 Andrew Jackson Young was born in New Orleans, Louisiana. He is an American politician, diplomat, activist and pastor from Georgia. He has served as a Congressman from Georgia's 5th congressional district, the United States Ambassador to the United Nations, and Mayor of Atlanta. He served as President of the National Council of Churches USA, was a member of the Southern Christian Leadership Conference during the 1960s Civil Rights Movement, and was a supporter and friend of Dr. Martin Luther King, Jr. Since leaving political office in 1989, Young has founded or served in a large number of organizations founded on public policy, political lobbying and international relations, with a special focus on Africa. Young graduated from Howard University and earned a divinity degree from Hartford Seminary in Hartford, Connecticut, in 1955. Young was appointed to serve as pastor of a church in Marion, Alabama. Young moved to Atlanta, Georgia, in 1961, and again worked on drives to register black voters. In 1960, he joined the Southern Christian Leadership Conference.