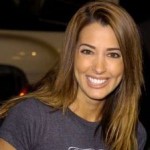 Amy Marie Weber is an American actress, model, film producer, former professional wrestling valet, former professional wrestler and singer who is best known for her time as a WWE Diva in World Wrestling Entertainment under the SmackDown! brand. Weber recently released an album, Let it Rain, the titular single for which stayed in the US Billboard Chart for over a month. It was also was released internationally via Dauman Music and Republic Digital and climbed to number 6 in the UK Singles Chart. Weber is the executive producer of the Film Crossroad which she also stars in. Weber has also been the face of a Shiseido cosmetic campaign. Weber has played roles in numerous television series including CSI: Las Vegas, Son of the Beach, Andy Richter Controls the Universe, Saved by the Bell, Melrose Place, Pacific Blue, The Young and the Restless, Baywatch, Jenny, USA High and City Guys. Weber has had lead roles in the movies Scarlet Mirror, The Bet, Dr. Life, Art House, Kolobos, The Contract, Starforce, Crackerjack III, Becoming Pony Boi, The Pumpkin Karver and Transmorphers.