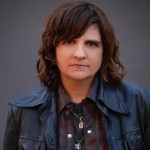 Amy Elizabeth Ray was born in Decatur, Georgia. She  is an American singer-songwriter and member of the contemporary folk duo Indigo Girls. She also pursues a solo career and has released six albums under her own name, and founded a record company, Daemon Records. In 1986, Ray graduated from Emory with majors in English and Religion. In March 2001, Ray released her first solo album, Stag, a southern and punk rock album. In April 2005, Ray released the softer edged Prom, and in December 2006, she released Live from Knoxville. Her fourth solo album, the melodic Didn't It Feel Kinder, was released in August 2008. Lung of Love, which has more of an indie-rock sound, was released in 2012. Ray currently lives in the foothills of North Georgia. She and her partner, Carrie Schrader, have a daughter, Ozilline Graydon.