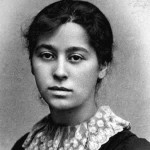 Amy Levy was a British poet and novelist, who is celebrated for her feminist positions and her engagement with homosexual romance during the Victorian era. Levy was born in the affluent south-west district of London, Clapham, on the 10th of November in 1861. Born to Lewis Levy and Isobel Levin, she was the second child of seven in a small, religious Jewish family. As an adult, Amy Levy no longer practiced Judaism, but nonetheless continued to identify herself as Jew. Traveling in Europe, she met Vernon Lee in Florence in 1886, and fell in love with her. Both women would go on to write works with sapphic love. Vernon Lee, the fiction writer and literary theorist, was six years older, and inspired the poem To Vernon Lee. Despite many friends and an active literary life, Levy had suffered from episodes of major depression from an early age which, together with her growing deafness, led her to commit suicide on September 10, 1889, at the age of twenty-seven, by inhaling carbon monoxide. Oscar Wilde wrote an obituary for her in Women's World in which he praised her gifts.