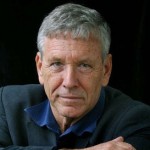 Oz was born in Jerusalem, where he grew up at No. 18 Amos Street in the Kerem Avraham neighborhood. Roughly half of his fiction is set within a mile of his boyhood home. He and his family were distant from religion, disdaining what they perceived to be its irrationality. Yet he attended the community religious school Tachkemoni as the alternative was the socialist school affiliated with the labor movement, to which his family was decidedly opposed in their political values. The noted poet Zelda was one of his teachers. After Tachkemoni he attended Gymnasia Rehavia.
Like most Israeli Jews, he served in the Israeli Defense Forces. In the late 1950s he served in the kibbutz-oriented Nahal unit and was involved in border skirmishes with Syria; during the Six-Day War (1967) he was with a tank unit in Sinai; during the Yom Kippur War (1973) he served in the Golan Heights. After Nahal, Oz studied philosophy and Hebrew literature at the Hebrew University, Jerusalem, where he was sent by the General Assembly of the kibbutz. After graduating in 1963, he worked as a teacher of literature and philosophy.
His earliest publications were a few short articles in the kibbutz newsletter and the newspaper Davar. His first book Where the Jackals Howl, a collection of short stories, was published in 1965. His first novel Elsewhere, Perhaps was published in 1966. Following this, he began to write prolifically, publishing an average of one book per year on the Labor Party press, Am Oved. He ultimately left Am Oved, despite his political affiliation, and went to Keter Publishing House and signed an exclusive contract that granted him a fixed monthly salary regardless of frequency of publication.