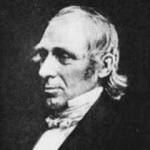 A native New Englander, Amos Bronson Alcott was born in Wolcott, Connecticut. At age six, young Bronson began his formal education in a one-room schoolhouse in the center of town but learned how to read at home with the help of his mother. The school taught only reading, writing, and spelling and he left this school at the age of 10. At age 13, his uncle, Reverend Tillotson Bronson, invited Alcott into his home in Cheshire, Connecticut to be educated and prepared for college. Bronson gave it up after only a month and was self-educated from then on. At age 17, Alcott passed the exam for a teaching certificate but had trouble finding work as a teacher . Instead, he left home and became a traveling salesman in the American South, peddling books and merchandise.
On November 6, 1827, Alcott started teaching in Bristol, Connecticut, still using the same methods he used in Cheshire, but opposition from the community surfaced quickly; he was unemployed by March 1828. He moved to Boston on April 24, 1828, and was immediately impressed, referring to the city as a place "where the light of the sun of righteousness has risen." He opened the Salem Street Infant School two months later on June 23. On September 22, 1834, Alcott opened a school of about 30 students, mostly from wealthy families. It was named the Temple School because classes were held at the Masonic Temple on Tremont Street in Boston.
Alcott's daughter Louisa May came to visit him at Louisburg on March 1, 1888. He died three days later on March 4; Louisa May died only two days after her father.