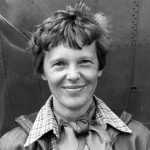 Amelia Mary Earhart, daughter of German American Samuel "Edwin" Stanton Earhart and Amelia "Amy" Otis Earhart, was born in Atchison, Kansas. As a child, Earhart spent long hours playing with Pidge, climbing trees, hunting rats with a rifle and "belly-slamming" her sled downhill. Earhart received a form of home-schooling together with her sister, from her mother and a governess. She laterenrolled in public school for the first time with Amelia Earhart entering the seventh grade at the age of 12 years. Earhart graduated from Hyde Park High School in 1916.
When the 1918 Spanish flu pandemic reached Toronto, Earhart was engaged in arduous nursing duties including night shifts at the Spadina Military Hospital. By 1919 Earhart prepared to enter Smith College but changed her mind and enrolled at Columbia University signing up for a course in medical studies among other programs. In Long Beach, on December 28, 1920, Earhart and her father visited an airfield where Frank Hawks gave her a ride that would forever change Earhart's life.
After that 10-minute flight, she immediately became determined to learn to fly. Working at a variety of jobs, including photographer, truck driver, and stenographer at the local telephone company, she managed to save $1,000 for flying lessons. Earhart had her first lessons, beginning on January 3, 1921, at Kinner Field near Long Beach, but to reach the airfield Earhart took a bus to the end of the line, then walked four miles (6 km). Earhart's mother also provided part of the $1,000 "stake" against her "better judgement."
On May 15, 1923, Earhart became the 16th woman to be issued a pilot's license by the Fédération Aéronautique Internationale (FAI). During an attempt to make a circumnavigational flight of the globe in 1937 in a Purdue-funded Lockheed Model 10 Electra, Earhart disappeared over the central Pacific Ocean near Howland Island. Fascination with her life, career and disappearance continues to this day.