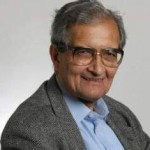 Amartya Kumar Sen was born in Santiniketan, West Bengal, India. He is an Indian economist who since 1972 has taught and worked in the United Kingdom and the United States. He has made contributions to welfare economics, social choice theory, economic and social justice, economic theories of famines, and indexes of the measure of well-being of citizens of developing countries. He was awarded the Nobel Memorial Prize in Economic Sciences in 1998 for his work in welfare economics. He is currently the Thomas W. Lamont University Professor and Professor of Economics and Philosophy at Harvard University. He is also a senior fellow at the Harvard Society of Fellows, distinguished fellow of All Souls College, Oxford and a Fellow of Trinity College, Cambridge, where he previously served as Master from 1998 to 2004. He earned a First Class First in his B.A. (Honours) in Economics. The same year, 1953, he moved to Trinity College, Cambridge, where he earned a First Class MA (Honours) in 1956. After Sen completed his Tripos examination and enrolled for a PhD in Economics at Trinity College, Cambridge, he returned to India on a two-year leave.