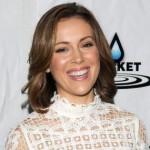 Alyssa Milano is the daughter of Lin, a fashion designer and talent manager, and Thomas M. Milano, a film music editor. Milano was born in Brooklyn and grew up on Staten Island. Milano began her career at age eight after winning a role in an open audition for a national tour of Annie. She was one of the four picked out of an audition with over 1,500 girls. She appeared in off-Broadway productions and television commercials, the latter of which she hated doing because of the long hours.
At age 10, she won her first major role in the television show Who's the Boss? alongside Tony Danza, Judith Light, Danny Pintauro and Katherine Helmond. On stage, she starred in Tender Offer, a one-act play written by Wendy Wasserstein, All Night Long by American playwright John O'Keefe, and the first American musical adaptation of Jane Eyre. She returned to the theater in 1991, when she starred in and produced a Los Angeles production of Butterflies Are Free from December 26 until January 19, 1992.
By the late 1980s, Milano was established as a teen idol, appearing in made-for-television teen films such as Crash Course and Dance 'til Dawn (both 1988). She produced a teen workout video in 1988 called Teen Steam and achieved some fame outside the USA with her music career, which lasted until the early 1990s. In 1991, Milano wanted to quit acting to pursue an academic career, but was unable to gain release from her contract.