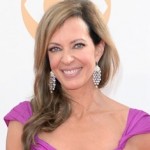 Allison Brooks Janney was born in Boston, Massachusetts and grew up in Dayton, Ohio. She is an American actress. She played White House Press Secretary C. J. Cregg on the television series The West Wing, a role for which she won four Primetime Emmy Awards, a Satellite Award and four Screen Actors Guild Awards and was nominated for four Golden Globe Awards, an AFI Award and a further two Primetime Emmy Awards, one Satellite Award and seven Screen Actors Guild Awards. Her films include Big Night, Primary Colors, Drop Dead Gorgeous, 10 Things I Hate About You, American Beauty, The Hours, Finding Nemo, Hairspray, Juno, The Help, and The Way Way Back. Currently, Janney stars in the CBS sitcom Mom as Bonnie Plunkett and had a recurring role on the Showtime series Masters of Sex as Margaret Scully.