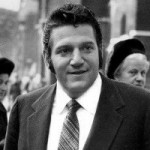 Allen Klein was born in Newark, New Jersey, the son of Jewish immigrants from Budapest, Hungary. His father was a butcher by trade, and his mother died before his first birthday. As a teenager, he worked in several jobs while attending evening classes. He excelled at mental arithmetic, and graduated from Upsala College, East Orange, New Jersey, in 1956.
He undertook bookkeeping for several people in showbusiness, and audited record companies. In 1957 he began his own business, a partnership with his wife Betty. Record industry insiders began to fear his blunt-speaking tenacity, and well-placed people began to recommend him. Klein regarded himself as a shrewd and tenacious businessman.
Cameo Records was formed in 1956 and Parkway, a subsidiary, was formed in 1958. They were based in Philadelphia and specialised in teen market pop music. They had run out of hits by 1964, but struggled on until 1967, when Klein bought them, together with rights to music by The Animals, Herman's Hermits, Bobby Rydell, ? and the Mysterians, Chubby Checker and recordings produced by Mickie Most.
Klein became the business manager of Sam Cooke, and in 1963 Klein started to take control of all aspects of Cooke's career and demanded an independent record company. In 1965, Klein became the co-manager of The Rolling Stones. In 1966 Klein bought Andrew Loog Oldham's share of the Rolling Stones' management, though Oldham continued in his role as the band's producer until late 1967.