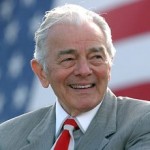 Allen Harold "Al" Neuharth was an American businessman, author, and columnist born in Eureka, South Dakota. He was the founder of USA Today, The Freedom Forum, and its Newseum. Neuharth graduated high school from Alpena High School, Alpena, SD, where he worked for Allen Brigham, owner of the local newspaper, the Alpena Journal. At the age of 19, Neuharth served in the Army during World War II. After the war, Neuharth attended the University of South Dakota in Vermillion, where he edited the school newspaper, The Volante. He started Today in Cocoa, Florida, which eventually became Florida Today. He helped to build Gannett into the largest newspaper company in the United States. Neuharth founded USA Today in 1982, which as of March 2013 was the third most widely read newspaper in the country. Neuharth retired from Gannett on March 31, 1989, at the age of 65.